Are you seeing spots before your eyes? Especially on the side of your house, on your car, or on your plants outdoors? (Fig. 1) Often mistaken for scales, these tiny dark spots are coming from a group of fungi known as artillery fungi. Additional names are “cannon” or “shotgun” fungi. These fungi are associated with dung and other organic matter. They can also be found in rotting, moist mulches consisting mostly of wood. Mulch made of pine bark nuggets appear to be more resistant to the development of artillery fungus.

Artillery fungus (Fig. 2) has an interesting method for spore dispersal. Dark brown spore packets, called peridioles, are on top of unique cup-shaped cells which accumulate water. When enough liquid has filled the cup, the cupped cells invert causing the cells to burst and propelling the spores as high as eighteen to twenty feet where they adhere to new surfaces.

The fungal spores appear as yellowish-brown to back circular spots of about 1-2 mm in diameter. They can be found on almost any surface due to a sticky substance reminiscent of “super glue” covering the spores. The fungi are very light sensitive and the spores are directed toward it, so they often are found on white or light-colored surfaces (house-siding, white cars, etc.) or other bright, light colored substances. 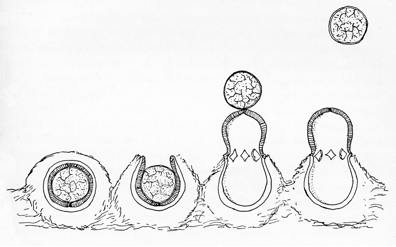 The easiest way to manage this problem is to remove the old mulch and replace with pine bark nugget mulch, or to use some synthetic mulches, such as shredded rubber or artificial pine needles, which are not conducive to fungus growth. When replacing old mulch place it in a biodegradable bag and take to a landfill.

One can remove the spores from surfaces but it takes a lot of hard work. Scrubbing and scraping with tools or powerwashing the surface mad aid in the removal of the spores; however using harsh chemicals may damage painted or colored surfaces.

There is no fungicide registered at this time to control artillery fungus.