The southern black widow, as its name implies, resides primarily in the southeastern United States (including Charlotte, Raleigh, and Wilmington, NC!).

The black widow gets its name from the misconception that the female eats the male after mating.

How to Identify Black Widow Spiders 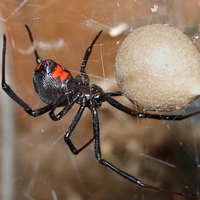 Spiders instill fear in many people and the black widow is one of the most feared, owing to its venomous bite (females, not males). All spiders are non-insect arthropods. They have 2 body parts and 8 legs. Insects have 6 legs. Spiders are hunters of insects and other arthropods that are caught in their webs or have been captured. A female black widow spider body is about 1/2 inch in length; the spider is about 1-1/2 inches overall. Color varies from glossy black to dark brown (most are black with the red hourglass on the underside). They have 2 distinctive, connected triangles that are the bright red in color and resemble an hourglass. Males are about half the size of the females. Males are a lighter color with a row of red spots with white lines radiating outward from the center. The black widow spider produces silk threads which are used for its web, egg sacs, to catch prey, hold prey and/or “ballooning” (also known as “dynamic kiting”). This silk hardens upon contact with the air.

The Biology of Black Widow Spiders

This spider spends most of its time on a web that it has usually built in a corner. It spends this time upside down waiting for its prey to be trapped in its web. The female spider produces a sac which holds its eggs. This egg sac contains 100-900 eggs. A female can produce from 4-9 egg sacs each summer, and since she is able to live for 5 years, she can lay up to 20 – 45 sacs in her lifetime, producing more than 40,000 total eggs.

A web can contain 2 sacs (produced in about 1-3 hours; when freshly laid, the egg sac is pure white but will change to light tan in a few hours), but usually, there is only one egg sac placed in the middle of the web. The eggs hatch in the sac. If you look closely, you can sometimes see the spiderlings on the web. Spiderlings emerge from the sac after the second molt. At each molt, they change colorations and patterns. After the 2nd molt, the spiderlings have the ability to produce silk strands that enable them to catch air currents and float with the wind to their new home. This is known as “ballooning” or “dynamic kiting” (see E. B. White’s charming tale “Charlotte’s Web”). They overwinter and develop into adults in the spring.

Where do you See Black Widow Spiders?

Black widow spiders typically feed on other insects. When insects are captured, she swiftly moves in to wrap the prey then inject the prey with her venom. After about 10 minutes the prey is subdued and the black widow retreats to a more protected area to feed.

Ways to reduce the conditions that harbor and attract black widows: