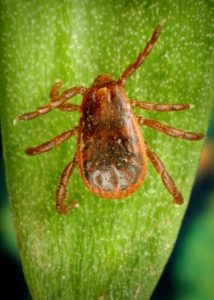 The brown dog tick is found throughout much of the United States.  It primarily feeds on dogs, but will also occasionally bite people and unlike other species of ticks, it can complete its life cycle indoors. It is mainly found in kennels or homes with dogs where it may be found hiding in cracks, under rugs and furniture, or behind draperies on walls. After the female lays her eggs, which may number in the thousands, larvae may be found crawling all over the dwelling.

The adult is about 1/8 inch in length and is reddish-brown in color. It usually attaches itself around the ears or between the toes of a dog to feed. It is not a major vector of any diseases affecting people.

Contact us today for our signature Pest Elimination Plus program!