This insect gets its name from the fact that it is beautiful, gentle and elegantly dressed. 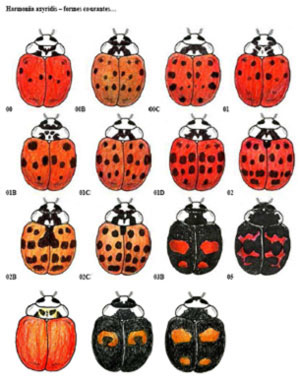 How to Identify Lady Bugs

Multicolored Asian lady beetle adults are small to moderate in size – about 7/32 to 1/4 of an inch long, oval and can be red, yellow, orange or black in color. North American populations range in color from yellow-orange to bright red-orange, with or without black spots. Their antennae are very short and usually not noticeable. The lady bug has a pronotum (found just behind the head) that is ivory with black markings that look like a W or M when viewed from the front or the back. The beetle has a chemical defense to discourage predators. This foul-smelling chemical is also present in their hemolymph (blood) and the beetles will “reflex bleed” when agitated, releasing hemolymph through the joints on their legs. This discharge will cause staining. They are found throughout much of the eastern U.S., including our service areas of Charlotte, Raleigh, Chapel Hill, Durham, and Wilmington, NC.

Where do these Lady Bugs Come From? 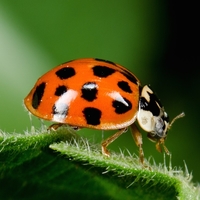 They have been introduced from Asia by organic gardeners to be a biological control measure against aphids, mealy bugs, mites and other soft-bodied insects. In their native home, large numbers of lady bugs overwinter in mountains and craggy outcrops. Because North Carolina does not have the granite mountain features that the beetles seek to pass the winter, they are attracted to light-colored houses on the horizon that mimic the usual hibernation sites.

Where do you See these Lady Bugs?