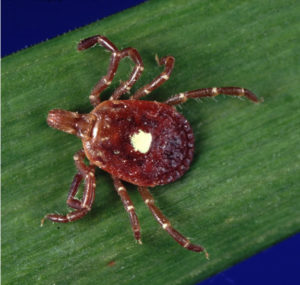 The lone star tick feeds on a wide range of hosts including man and medium to large domestic animals such as dogs, and deer. Immature stages are also found on these hosts but also commonly found on birds. These ticks are most active in the spring, summer and early fall. The larval stage is very tiny and is often called a “seed” tick and is very abundant in the fall. The nymph is slightly larger and is the stage most frequently observed. Adults are about 1/8 inch and brown.  The adult female has a white spot in the middle of her back. In North Carolina, the lone star tick is found predominantly in the Coastal Plain although its range will extend into the Piedmont.

Lone star tick is a vector of Rock Mountain spotted fever, although not as readily as the American dog tick. The bites of the tick also cause an illness called STARI (Southern Tick-Associated Rash Infection) which mimics the rash seen in Lyme Disease. This disease is not caused by the same organism responsible for Lyme Disease. It also transits ehrlichiosis in people.

Contact us today for our signature Pest Control Solutions program!