Termites cause over 5 billion dollars worth of damage a year. Another 2.2 billion is spent on the control of termites each year. They will invade any structure from the Statue of Liberty to the White House to your house. No structure is immune. A quality pest prevention specialist is your best guarantee, whether you live in Raleigh, Charlotte, Wilmington or a surrounding area. 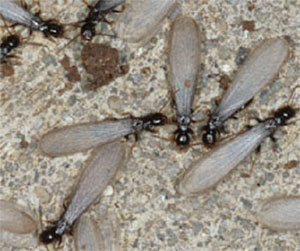 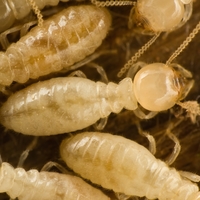 How to Identify Termites

Termite swarmers’ (winged reproductives) bodies are about 3/8″ long and black to dark brown. Their bodies are shaped with no apparent distinct body parts and a thick waist that gives it a shape of your finger. Swarmers have four equal wings that are translucent or milky color with no apparent veins and extend beyond the abdomen. Sometimes the homeowner will only see the discarded wings in great numbers and no insects. The termite has straight antennae. Swarmers usually emerge from an infested tree stump or log or they can swarm inside a home or structure. They can swarm by the hundreds or thousands. This swarm happens usually from March to June but can also happen in autumn. The only purpose of the swarmers is to reproduce and start new colonies; it does no damage but can be frightening to homeowners when they see hundreds or thousands. When you see swarmers, it is a mature colony.

The signs of a termite’s presence are:

Often people will see swarms of winged ants and think that they are seeing termites. The following image illustrates the difference between the two. You don’t want termites OR ants! 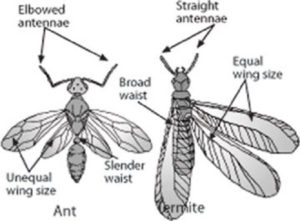 The Biology and Habits of Termites

The termite queen and king are primary reproductives. As the colony develops, the queen’s only purpose is to lay eggs. She can live up to 30 years and can lay between 5,000 to 10,000 eggs per year once the colony is mature. These eggs develop into the 3 different castes: workers, soldiers, and reproductives, (primary and secondary). Mature colonies can have 60,000 workers. There is no wonder they do so much damage!

The workers: Are the most numerous individuals in the colony and perform all the work and DO ALL OF THE DAMAGE. This includes making tunnels, grooming the queen and feeding the other members. The worker has the ability to chew wood or cellulose. This is where the damage comes from as well as their economic significance. The workers, during their molting, can become soldiers, swarmers or secondary reproductives.

They have large heads and use their large jaws against the intruder. They are far fewer than the workers.

The reproductives: These are the swarmers described in the identity section. The secondary reproductives can change due to the needs of the colony. They are in older, more mature colonies. They can also produce eggs and in a crisis or if needed, they can serve as replacements to the primary reproductives.

Ways to reduce the conditions that harbor and attract termites: