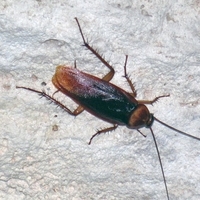 How to Identify American Cockroaches

What does an American cockroach look like? The American roach, also known as a water bug and/or the palmetto bug, is the largest of the roaches (up to 1-1/2 inches) and reddish-brown, with a pale brown or yellow border on the upper surface of the pronotum (just behind the head). Both male and females have full wings. This roach can fly and it crawls very fast. If the pest looks like this, it is an American roach.

It is very important to know which species of cockroach you have since their habits and food preferences vary greatly.

Their mere presence is a nuisance and they can be carriers of many common diseases.

Where do American Cockroaches Come From?

American cockroaches generally live in moist areas; however, they can survive in dry areas if they have access to water. They prefer warm temperatures and find cold temperatures intolerable, which is why you don’t see them during the winter months. In the United States, this is the most common cockroach found in the sewer system. While occasionally found in residences in central North Carolina, they are more commonly found in homes in central/southeastern Coastal Plains areas. Generally, they are much more prevalent in commercial environments such as restaurants, bakeries, grocery stores, food-processing plants, hospitals, etc. During warm weather, they will move outside into yards. 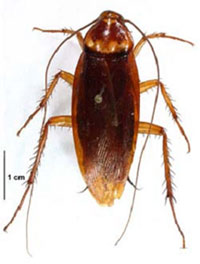 Where do you See American Roaches?

When indoors, the nymphs and adults are usually found in the dark, moist areas of basements and crawl spaces as well as in and around bathtubs, clothes hampers, floor drains, pipe chases, kitchens, laundry rooms and upper and lower cabinet areas. In basements, they are usually found in corner areas and high on the walls.

If the building has steam heat, they will follow steam heat tunnels. They will also be in large boiler rooms around pipes and floor drains.

How do American Cockroaches Multiply?

The female, when inside the home, lays a dark-brown to black egg capsule about one per week – from 15 to 90 egg capsules in her lifetime.

One capsule can have up to 16 eggs (16 x 90 = 1440), so you can see that you can have quite a pest problem with American roaches. That’s why it’s important to eliminate roach eggs when you treat for cockroaches. Simply eliminating the live roaches won’t fix the problem.

At room temperature, these nymphs will hatch out in 50-55 days. The nymphal stage lasts on average about 15 months, varying between 9-1/2 to 20 months. Adults may live up to a year or more.

Ways to reduce the conditions that harbor and attract the American Roach: