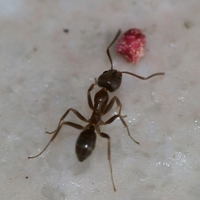 How to Identify Argentine Ants

Argentine ants will usually be in large numbers and light to dark brown in color. The workers are 1/12 to 1/8 inches long; queens are much larger – 1/6 to1/4 inches long. Argentine ants, as the name implies, are native to Argentina and most probably were transported by ships to New Orleans in the 19th century. One needs a microscope to correctly identify this insect.

If the ants are about 1/8″ long and look like they have a stinger on their back end, they might be Asian needle ants. If the ants are up to half an inch long, they may be black carpenter ants. If the ants are red and located in mounds of soil or dirt outside, then they are probably fire ants, and you should probably stay away because they can sting! If the insect gives off a slightly coconut odor when crushed, then it is probably an odorous house ant.

It is very important to know which ant species you are dealing with since their habits and food preferences vary greatly.

This is due to their mere presence as an overwhelming nuisance pest.

Where do Argentine Ants Come From?

The Argentine ant is a SERIOUS pest in the southern United States (including Raleigh, Charlotte and Wilmington!) and in California. In areas of heavy infestation, they may be found in practically every home. This means in severe infestations, there may not be just thousands but hundreds of thousands of Argentine ants in and around structures.

In Argentine ant colonies, there are MANY FERTILE QUEENS. Colonies are usually 10% queens and 90% workers. Mating usually takes place inside the nest, so winged forms are not usually found. In the summer months, argentine ant nests will be almost anywhere that a suitable nest site is available. Argentine ants will also nest indoors and can even nest in potted plants. 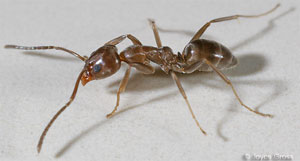 When outdoor conditions are either too wet or too dry, Argentine ants invade buildings by trailing along tree and shrub branches, utility wires and lines that contact the structure.

Workers forage for food along regular paths extending out from the nest and branch out to explore every portion of the area. Foragers may enter houses in LARGE NUMBERS, particularly when conditions outside the building become too wet or dry. This ant is well adapted to urban and suburban environments and will persist where other ants do not thrive. It may be the only ant species present in many locations. Workers are very aggressive and often eliminate other ants in the area. HOWEVER, DIFFERENT ARGENTINE ANT COLONIES CAN EXIST IN THE SAME AREA, SO THE NUMBER OF COLONIES PER UNIT AREA MAY BE QUITE HIGH.

Since they have a habit of crawling over everything in their path, they can transport some diseases such as dysentery, etc.

Where do you See Argentine Ants?

Argentine ants can be seen almost anywhere in the home or structure. Usually they will first be seen in the kitchen areas searching for food. They often enter homes during dry or hot weather and will sometimes show up in overwhelming numbers.

Argentine ants prefer sweets such as honeydew, fruit juices and plant secretions, but will also forage on proteins (meats, insects, eggs) and fats and even attack small vulnerable animals.

Do-it-yourself ways to reduce the conditions that harbor and attract the Argentine ant: