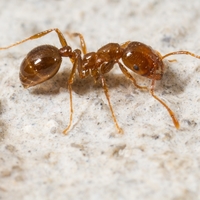 How to Identify Imported Fire Ants

Imported fire ants are native to Brazil and present a serious pest problem from the southern United States to Virginia, including our service areas of Raleigh, Durham, Chapel Hill, Charlotte and Wilmington, NC. This ant gets its name from its ability to inflict painful stings. Imported fire ants vary in size from 1/16 to1/4 inches long. They have a reddish-brown head and thorax with a dark brown abdomen. The pedicel or “waist” of the imported fire ant consists of 2 segments. Their preferred nesting sites are areas where soil has been disturbed. Mounds are built of soil and are seldom larger than 18 inches in diameter. When a mound is disturbed, the ants emerge aggressively to bite and sting the intruder. A white pustule usually appears the next day at the site of the sting. The sting that they inflict can be of serious concern since about 2% of the population of the US is at risk of anaphylactic shock. This species is steadily moving northward.

If the ants are about 1/8″ long and look like they have a stinger on their back end, they might be Asian needle ants. If the ants are up to half an inch long, they may be black carpenter ants. If they’re in great number and extremely small, they might be Argentine ants, which can only be identified via microscope. If the insect gives off a slightly coconut odor when crushed, then it is probably an odorous house ant.

It is very important to know which ant species is present on your property since their habits and food preferences vary greatly.

This is due to their mere presence as an overwhelming nuisance pest.

The Biology of Imported Fire Ants

The fire ant is a SEVERE pest in the southern United States. The red imported fire ant colony can have a single queen or multiple queens. The single-queen colony can typically have 80,000 members.

Over time, colonies can become supercolonies that have multiple queens and numbers of up to 300,000 individuals. So far, multiple-queen colonies have not been found in North Carolina.

The lifespan of the imported fire ant depends on its size. Minor workers may live 30 to 60 days; major workers 90 to 180 days; queens may live 2 to six years. The complete life cycle from egg to adult takes between 22 and 38 days.

The diet of foraging workers consists of dead animals, including insects, earthworms, and vertebrates. Workers also collect honeydew and will forage for sweets, proteins, and fats in the home.

Imported fire ants are usually first seen in the yard as ground-infesting ants. Victims wander on to the nest and may not even know what they are standing on until they feel the multiple stings of the many agitated members. These ants are often introduced to new locations through landscape activities where plants may have been obtained from areas already infested with fire ants.

Imported fire ants arrive in the root balls of plants, shrubs, and trees. They can also move from your neighbors’ yards as the colony grows. While foraging for food, they can enter homes through cracks and crevices in the outside foundation wall.

After a rain, mounds will appear overnight, seemingly by magic.

Typically, HVAC units offer easy access and are warm and inviting in the winter. These ants also like electrical switches and have been known to short out electrical equipment. Our exterminators have even seen them sandwiched between the insulation and floor systems in crawlspaces.

Ways to reduce the conditions that attract the red imported fire ant: